Our beautiful church dates back to 1721 and, apart from the Parish Church, is the oldest place of Christian worship in Horsham. At one time our church hall housed the first lending library in town which continued until 1939. In the 1890s the Horsham Museum Society was founded by members of the Church and exhibits were kept in the hall until 1930 when they were moved to Park House in North Street. Our peaceful garden was formed out of the extensive graveyard which at one time surrounded the church. In 1976 it was dedicated as a Garden of Remembrance and is open to all.

The Horsham Unitarian Church fronts onto the Worthing Road, opposite the Library and adjacent to the Bus Station.

In July 1719 the land was sold by the weaver Edward Paine and his wife Hannah to John Dendy, apothecary, and John Geare, mercer, for £36 15s. In 1721 the land was transferred to nine trustees for 5s for a rent of 1d to be paid, if requested on the Feast of St Michael, 29th September.

The site was registered by the General Baptists for worship in 1719 and the church built in 1721 making it Horsham’s second oldest surviving place of worship. Prior to that, from 1648, worship took place in houses and barns. The window to commemorate 350 years was installed in 1998 above the then entrance porch, designed and made by Horsham-based Chris Durant in New Street. The General Baptists evolved into the Unitarians towards the end of the 19th century.

The building was designed to look like a conventional two storey house and is set back from the road to avoid attention being drawn to it since the Baptists’ faith was somewhat controversial in those times. Since the 1689 Blasphemy Act life had become uncomfortable for dissenters.

The congregation was founded in 1648 by Matthew Caffyn (1628 – 1714) who died before this building was erected. A window below the remaining gallery, dedicated to him, describes him as a ‘Battle Axe and Weapon of Warre’ and for his crimes he was imprisoned five times at Horsham Gaol.

Inside the main building a pipe organ dominates the south eastern corner of the church and dates back from 1850 with renovations dating back to the beginning of the 20th century. It is still in use today and, in addition to church services, is used for recitals. The pews were replaced in the early 1960s and came from the Crediton Unitarian Church in Devon which closed its doors. Pews from the same source were used to build the pulpit in the south western corner.

The church originally had galleries on the south, east and northern sides but only the northern gallery remains today. The entrance porch was added around 1727. Until 1771 baptisms took place at a lake by Mathew Cafffyn II’s farm. In that year the church bought some adjacent land and built a room 12′ by 10′ and created a ‘Baptissery’ supplied with water from a well by ‘pompe and shoots’. The baptismal tank was last used in about 1840 but is still in place. Under the kitchen, what was then the vestry, the 20′ deep well remains. 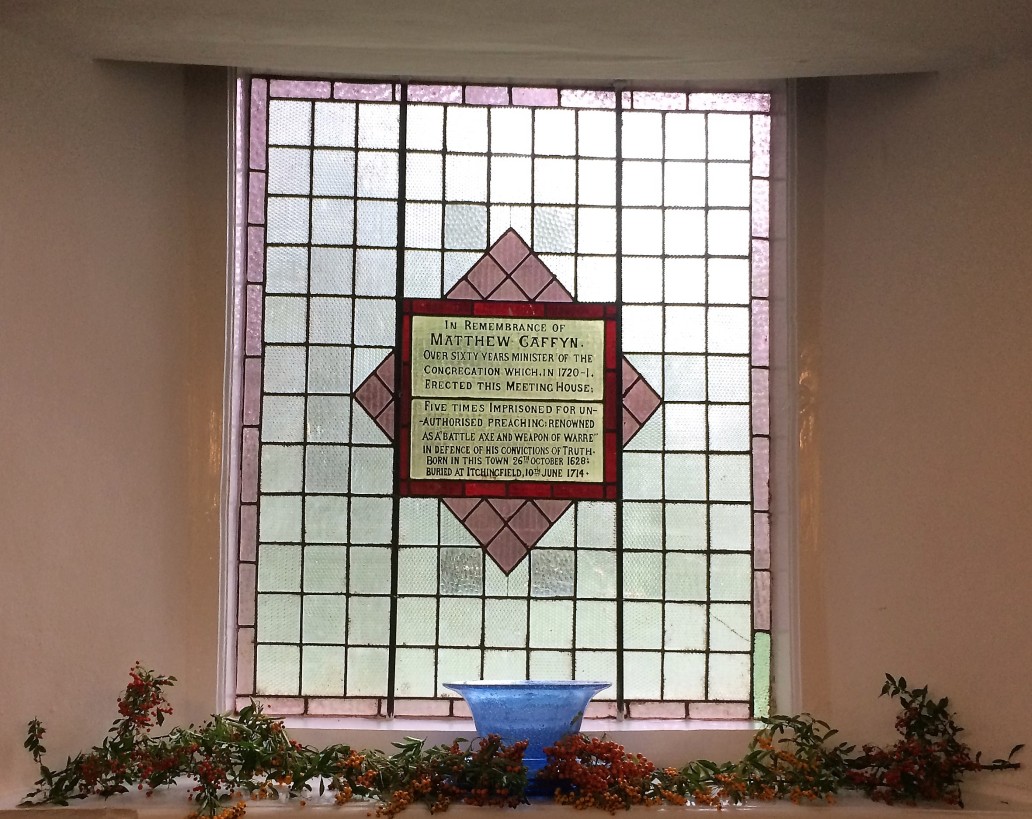 In remembrance of
Matthew Caffyn
Over sixty years minister of the
congregation which, in 1720-1
erected this meeting house
five times imprisoned for un-
authorised preaching; renowned
as a “battle axe and weapon of warre”
in defence of his convictions of truth
born in this town 26th October 1628:
buried at Itchingfield, 10th June 1714

In the early 19th century a new room was built on the back of the church. The room was the home to Horsham’s first library so it is fitting that the current library is just over the road having moved from a site near the Black Jug, Northe Street, in more recent years. The ‘Book and Tract Society’ founded by Robert Ashdown was later rebranded as ‘The Horsham Free Christian Church Public Lending Library’. At its peak the library housed between 4000-4500 books; in 1945 these were given to the County Library Service.

In 1893 (or 1897?) Church members also started the Horsham Museum Society. Quarterly events were put on to display the artefacts until 1928 when the museum relocated to Park House. The Society also put on lectures and arranged excursions to local historical sites.

In his 1911 book ‘Reminiscences of Horsham’ Henry Burstow recalled that the Baptist Church hosted an unusual burial:

Another remarkable night funeral I have heard my father say was that of Miss Elizabeth Gatford, a most eccentric lady, who died the 8th July, 1799. She willed, in 1790, that her corpse was not to be buried for one month, and that spirits of wine was to be used for its preservation. Accordingly between £30 and £40 was spent in this manner; she also willed that she was to be buried in four coffins — a shell, and one each of lead, oak, and stone, and that the ceremony should not take place until after 10 o’clock at night. She was buried in a vault at the Old Baptist Chapel, in Worthing Road, at 12 o’clock mid-night, the Rev. Evans, of Worship Street, London, preaching the burial sermon. The chapel and burial ground were crowded with church folk and dissenters of all sects. In her will she left £15 per annum to support, till they died, certain animals, cats, dogs, parrots, guinea pigs, &c., whom she had lived with; and also £5 5s per annum to be given in bread to the poor, a charitable bequest that is still regularly discharged.

Elizabeth Gatford once lived at North Chapel near to Horsham Station. A commemorative plaque to the Gatford family is to the right of the entrance and the vault is below the church floor. A wooden plaque on the north wall, beneath the gallery, refers to the charitable bequest described above.

* In 1665 the Quakers erected a meeting house just a short distance away in 1693 but this has been replaced by a newer building.

This feature has been informed by the ‘Welcome to Horsham Unitarian Church, Notes of Historical Interest’ by Miss Sybil Learoyd and the profile in August 2007 edition of The Unitarian, numbered 1243 written by Diana Ramsden and Dan Costley. 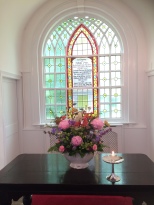 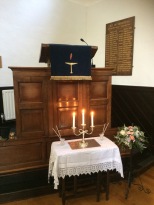